For True Precision Machining (TPM), located in Buellton, California, serving the engineering and machining needs of industries like aerospace, medical, military and others means keeping up with the latest machine tool technology.

The TPM facility has a complete in-house design, engineering, manufacturing and quality assurance team. This gives them a total understanding of customers’ manufacturing requirements.

The key to their success is a focus on continuous optimization and efficiency without compromising part quality. The goal is to provide customers with consistent precision, value and fast turnaround. To achieve this high level of performance on a daily basis, TPM relies on Doosan.

The Path to Doosan

When Todd Ackert founded TPM in 1998, he already had decades of experience in the machining trade. He started his career while still in trade school and then worked his way up to General Manager. He cut his teeth on conventional machines and when CNC became prominent, he learned to program and watched the technology evolve from punch tapes to gigabytes.

Even with all of his experience, moving away from Japanese equipment took a leap of faith. “We kind of joked about it at first,” Todd said. “But the first Doosan (DAEWOO) we bought was a PUMA 12S lathe. Ten years later, it was still running without a hitch.”

The company now has a mix of new and high-end Doosan machines working side-by-side with some “Old Reliables” from back in the day. “The Doosan machines are a good value with excellent quality,” Todd said. “Plus, we have an excellent support system right with Ellison Technologies right nearby. That’s why we’ve bought several new machines in the past two years.”

Nine is Fine for Complex Parts

The company really wanted to machine complete parts from stock and increase its capabilities. “The tech found in the SMX multi-function mill turn center series was the direction we really wanted to go,” Todd said. “We bought the PUMA SMX2600ST show machine at IMTS 2018 and it’s really performed well for us.”

When customers ask if the shop has a 5-axis machine, Todd tells them, “Yes, but we also have a 9-axis. They’re really impressed by that,” he said. 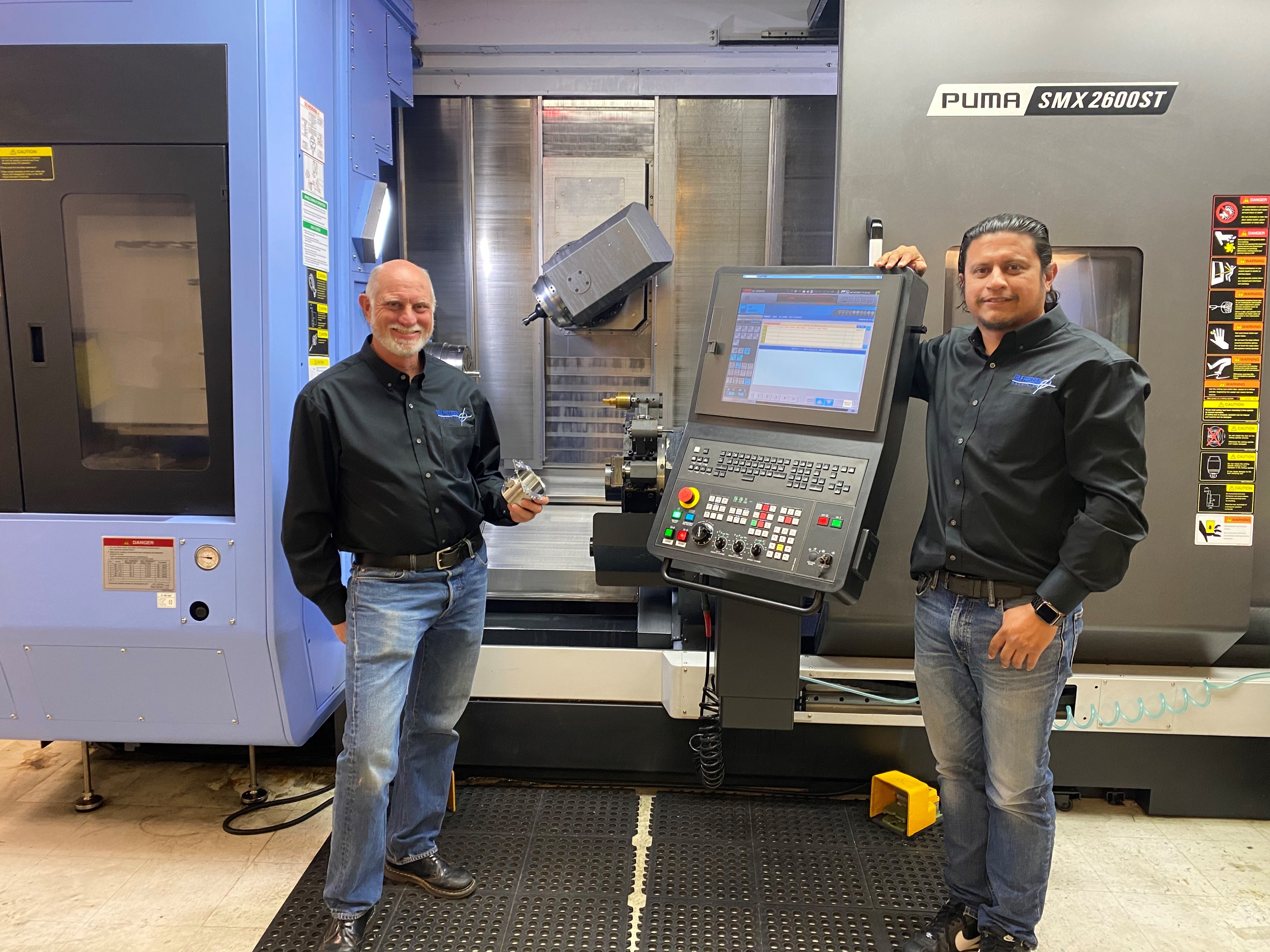 The 80-tool magazine is another big performance feature. Marv Rodriguez, VP of Operations, explains “We had an air conditioning/cooler part for a major aerospace corporation that took four operations totaling about two hours of cycle time. With the PUMA SMX2600ST, it’s now down to 20 minutes per part in one operation.”

When asked what kind of business the PUMA SMX2600ST could bring in, Marv responded, “I’d love to do impellers, something with a lot of machining time and tools. Maybe landing gears. We’re already starting to get some interest in that area.”

A DVF 5000 plus AWC (8 pallets) and 120-tool magazine is another recent acquisition. “We had a competitor’s 5-axis machine,” Todd said. “But we wanted something with a pallet pool.” The AWC gave the company an increase in capacity, reducing job setups for minimal turn around time. “The 120-tool magazine capacity allows us to be tooled up and ready for any kind of work in the future,” Marv added. “That other 5-axis is getting closer to the exit door by the day.”

The next project was to increase throughput with a leaner staff. “To us that meant increasing efficiency by touching the parts less,” Todd said.

A production style setup with bar feeder and parts catcher was a new idea for the company, but they got rid of an old machine to make room for a PUMA TT1800SY, a horizontal turning center with twin turrets, sub-spindle and Y-axis.

“We didn’t have any machines with bar feeds or twin turrets, it was new to us,” Marv said. “But it’s been helpful for us to have both of those additions. Even with one less machine, we increased productivity by running more parts faster through the PUMA.”

The PUMA TT1800SY has even enabled the company to run certain jobs on a lights out shift.

Todd is confident in the company’s ability to deliver to its customers. “Doosan helps us do that,” he said. “We’ve had other high-end stuff too, but we paid a lot for it. It just seems like Doosan is a better deal since the quality is comparable.”

Marv concluded, “We like to be challenged. if anyone would like to see if we can make their parts better and faster, we’d love to talk to them.”

High quality. Reasonable price. Productivity. Doosan. Contact us today and find out which of our machine tools can help you maximize the productivity of your operation.

We recieved your submission and will be in touch as soon as possible.