Schwoeppe Machine and Tool, located about an hour west of St. Louis, Missouri, has the equipment, dedicated craftsmen and experience in its 45,000 square foot facility to do a superior job on any type of machining or equipment integration project.

Their specialty of high volume production is what led them to such a wide range of expertise. High volume means automation, and to be good at automation, you have to be good at machining practices, fixture building, programing and every other aspect of the manufacturing process. From their beginning as a machine shop, the company soon evolved into an equipment integrator and proficiency in both disciplines grew in tandem. They have partnered with FANUC as a system integrator since 2008.

A Tall Order
With this background, Schwoeppe was well-positioned to bid for a project involving three different variations of a steel coupler. The competition was a manufacturer in Mexico, so the first order of business was to remove labor costs with automation. The production line was designed in-house by Schwoeppe’s engineers, integrating six Doosan machines into two lines, each line with its own overhead gantry loader. Schwoeppe was awarded the entire project based on their ability to deliver a high-quality product at a very competitive price.

Do It with Doosan
“We did our research and decided to build the cell with Doosan machines from the start,” said Andy Aholt, Schwoeppe’s Plant Manager. “They offer competitive performance at a significant cost savings when compared to Japanese machines. We knew their FANUC controls would also make the machines easy to integrate.”

Designed for Throughput
The final layout called for two mirrored production lines in a single cell, each consisting of two PUMA TT1800SY turning centers and one DNM 4500 machining center. A single gantry tends each line, feeding both lathes, mill, engraver and oiling station. Schwoeppe built custom moon roofs for quick part loading and unloading from the top, freeing aisle space between the lines.

Other factors in Doosan’s favor were the fact that the cycle times of the PUMA TT horizontal turning centers were just as good as the competition. Turret indexes, dwells, and rapid traverse rates were much faster than even earlier Doosan models in the shop. 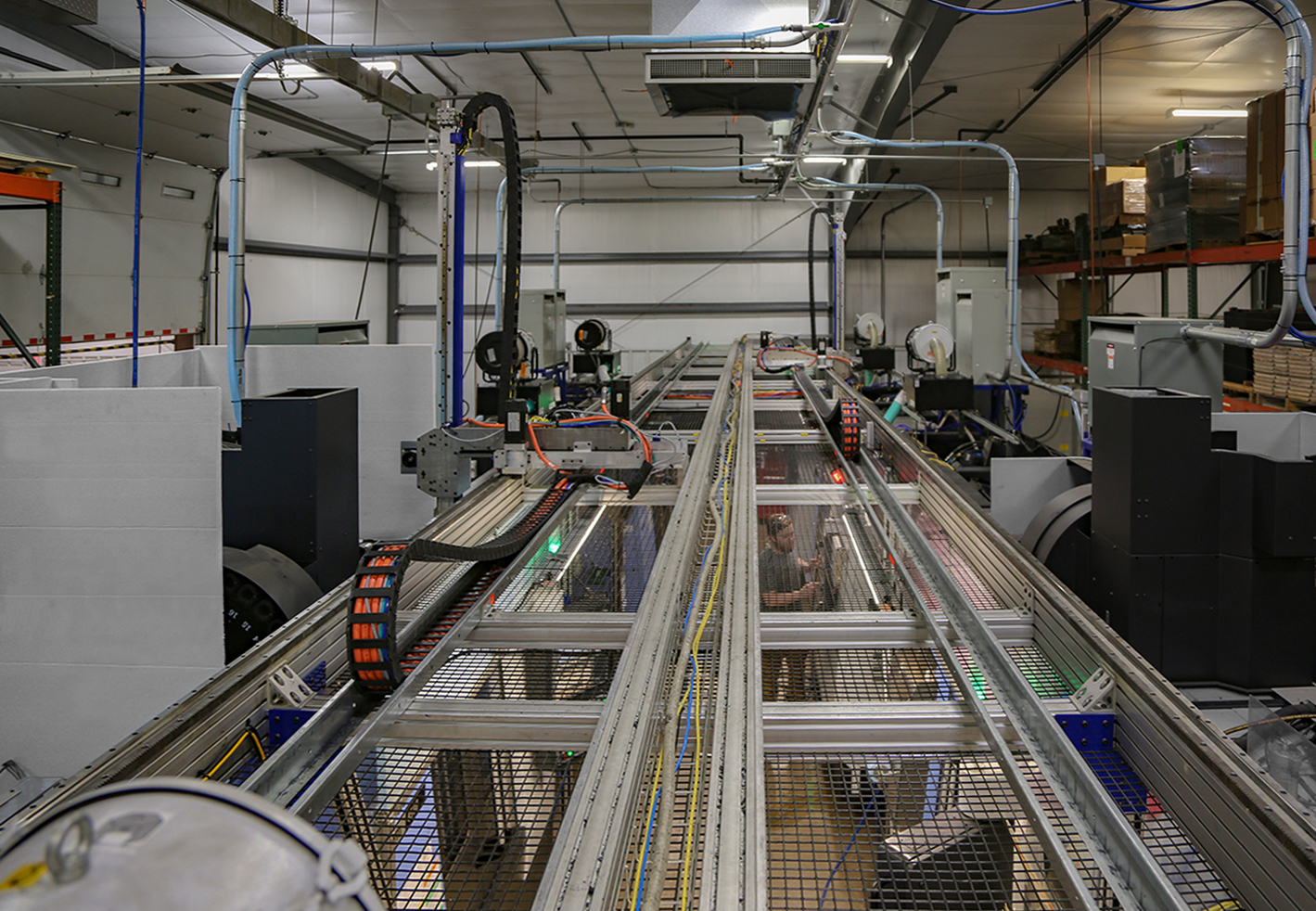 A Helping Hand
Ellison Technologies, Doosan’s distributor in the area, helped out in the initial engineering studies and procurement of the machine tools. Ellison ran multiple cycle time studies and even explored polygonal turning before the final two lathe + one machining center configuration was finalized. Additionally, Ellison’s application engineers have recommended tool load monitoring adjustments that have helped to reduce tooling costs and bad parts.

Up and Running
Today, the cell is working two shifts a day. One operator runs both lines, but little tending is needed, just small roll form head adjustments and setting tool change intervals, approximately twice per day based on expected tool life.

No Surprises Here
Andy says there have not been any issues with the Doosan machines, which frankly, is just what he expected. “The Doosan machines hold up just fine in a high volume production environment. Their performance has totally matched or exceeded our expectations,” he said. Schwoeppe bought their first Doosan (a PUMA 240 lathe) in 2005 and another one in 2006. They run production parts in aluminum and stainless, perform shaft work on hardened materials and work in the tool room. “It was our experience with those machines that influenced our decision to go with Doosan on the new cell,” he said.

If you are into high volume production, contact us for a consultation on the perfect Doosan machine for your application.