Those of us who make a living with machine tools don’t have to pull out our old high school physics book to know that (motion + friction = thermal energy). We live with the practical effects of this equation every day. To start with, heat is generated by the very action of a tool cutting metal. The process also sends hot chips flying about, which not only heat up the air in the CNC system but drive up the temperature of the coolant as well. More friction – and thus more thermal energy – is created by the bearings, belts, spindle motors, slide ways and ball screws to name just a few more sources. Even the ambient temperature in the shop can play a part in heat buildup.

The Effects of Heat on Machine Tools
Thermal growth is the enemy of precision machining because heat flows from hot to cold (more physics). For example, in a C-frame Vertical Machining Center Structure, heat migrates into the casting and causes expansion in the Y-axis and Z-axis. As the Y-axis expands, the column of the machine tends to lean forward and down.

The metal expands as the system gets hot, and then contracts as it normalizes. This heating and cooling process could possibly continue throughout the day, as the machine sits idle during setup or lunch breaks. With tolerances so tight today, this back and forth movement is enough to make repeatable precision work difficult.

For this reason, compensating for the effects of thermal expansion is one of the critical functions in maintaining overall part accuracy.

Eliminate Heat at the Source
Before any thermal compensation is implemented, we seek to first remove or mitigate the radiant heat potential from as many sources in the machine as possible. For example, let’s look at the Doosan NHP4000 & NHP5000 Horizontal Machining Centers, which were designed for minimum thermal displacement.

With standard features such as the application of cooling jackets to ball screw nuts and a mechanism to pass cooled oil through ball screw shafts, the X, Y and Z axes on the NHP Series are designed to reduce heat. A Spindle Cooling System maintains the uniform spindle temperature required for optimum accuracy by having cooling oil circulate around the bearings and motor windings. In addition, a Constant Pre-Load system on the spindle bearings actively adapts while the spindle is running.

Hot chips are evacuated rapidly using a massive volume center-through coolant design and a combination of flood and through-spindle coolant delivery. An optional coolant chiller can ensure that the coolant remains part of the solution instead of the problem.

When you’ve eliminated as many heat sources as possible, the next step is to compensate for the heat that remains.

Passive Thermal Compensation
A passive system is based on measuring thermal growth on a sample of machines running at a certain speed, plotting it out, and writing a routine that adjusts all the machines based on the sample findings. While this can work, the static settings don’t allow for changing conditions from moment to moment caused by variables such as the ambient temperature of the shop and inconsistent heat spikes from sources such as coolant and chips.

By the nature of the process, extrapolating from a sample means that individual machines fall outside the median and may have vastly different thermal growth rates. A passive system may cause more harm than good since it gives the impression that thermal growth is being compensated for, when this may not actually be the case.

Active Thermal Compensation
Instead of using a passive method of dealing with residual heat, the Doosan NHP Series uses an active sensor-based system. Thermal growth is measured with multiple sensors placed throughout the machine. One measures the ambient (normal) temperature of the casting. Another one is mounted right in the spindle. Optional sensors can be located throughout the machine column, especially at the spindle attachment point. The control gathers data points from all the sensors of that particular machine and uses the information to continuously measure and automatically compensate for the position of each axis. The operator can set compensation amounts and timing parameters and the NHP takes it from there

Beat the Heat!
Using this active system of eliminate and compensate, the NHP Series can reduce the effects of thermal growth by 70% or more! While it does not eliminate them completely, it sure beats continuously chasing tolerances or wondering if a passive approach is having any appreciable results. We think it’s the best way to keep your cool when turning out the precision parts your customers need.

If you’d like to learn more about reducing thermal expansion or the NHP Series, give your local Doosan distributor a call. 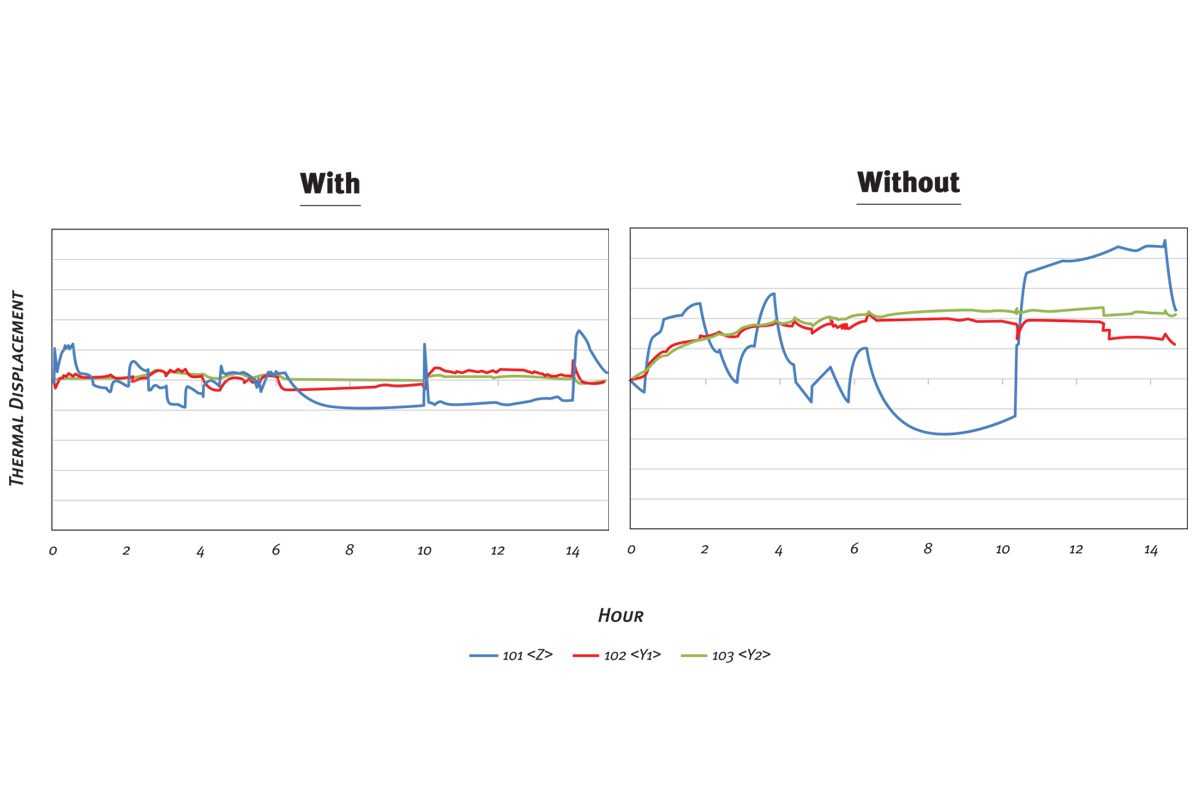